Can the airport change the flight paths?

No. The Federal Aviation Administration (FAA) controls and regulates all airspace. Any change in departure or arrival flight paths must be approved and implemented by the FAA. The Noise Office is here in large part to help foster communication between the airport, FAA and the local community. Additional information regarding "South Flow" procedures can be found in our separate FAQ.

What can I do to communicate my noise concerns and get involved with efforts to reduce aircraft noise?

In 1990, passage of the federal Airport Noise and Capacity Act (ANCA) resulted in severe limitations on the ability of airports to regulate noise. Under ANCA, any newly proposed airport operational restrictions or limitations require extensive analysis and Federal Aviation Administration (FAA) approval before they can be implemented. Additionally, federal grant assurances require that the airport be available for public use on reasonable terms and without unjust discrimination, which new restrictions could impede upon.

It is FAA policy that airport use restrictions should be considered only as a measure of last resort when other mitigation measures are inadequate to satisfactorily address a noise problem and a restriction is the only remaining option that could provide noise relief.

An airport restriction also must not create an undue burden on interstate commerce. The FAA will make the determination on whether it is an undue burden. While airport restrictions may have little impact at one airport, they may have a great deal of impact at others by adversely affecting airport capacity or excluding certain users from the airport. The magnitude of both impacts must be clearly presented. Any regulatory action that causes an unreasonable interference with interstate or foreign commerce could be an undue burden.

Areas within the 65, 70, and 75 CNEL/DNL noise contours are what the FAA considers to be the most impacted by aircraft-generated noise. From 1995-2009, the airport managed an Acoustical Treatment Program to treat affected residences within the 65 CNEL/DNL area and certain “significantly impacted” homes inside the 60 CNEL/DNL. $140 million was spent soundproofing the interiors of 2,675 homes and four schools. The program paid for new insulation, windows, doors, and air conditioning units. Currently, no residences within the 65 CNEL/DNL contour are considered incompatible with the noise generated by aircraft at SJC.

To conclude, it is extremely difficult to enact any new restrictions on aircraft operations. Restrictions not specific to areas within the 65 CNEL/DNL contours fall outside of the airport’s FAA-approved Part 150 Noise Compatibility Program designed to mitigate noise impacts. Part 150 identifies residential land uses as being normally compatible with noise levels below 65 CNEL/DNL.

Why do aircraft fly during the posted Curfew hours as outlined by the San Jose Municipal Code?

The City of San Jose established and began enforcing a noise-based curfew program during the hours of 11:30 pm and 6:30 am, which allows aircraft certificated by the FAA at a noise level at or below 89.0 EPNdB (average of take off, sideline and approach noise levels) and aircraft listed on the Schedule of Authorized Aircraft available on the Airport’s website, to fly during the curfew hours.

If the Noise Office staff finds that the aircraft operated during the curfew hours due to factors beyond the control of the operator such as weather in another city, mechanical delays, or FAA air traffic control delays, the flight is found to be in compliance with the City of San Jose Municipal Code and is not penalized for the operation.

If the Noise Office staff finds that the aircraft operated during curfew hours and the flight was scheduled for charter activities, was delayed due to a controllable event earlier in the day or found to be violating the City of San Jose Municipal Code, that airline will be penalized $2,500 per operation.

What happens when I submit a noise complaint to SJC?

I just heard a jet flying during curfew. What happened?

What kind of information should a complaint contain and why?

In order to assist the Noise Office, when filing a noise complaint form, please fill out all of the fields to the best of your knowledge. The more information provided on the Noise Complaint Form, the better a response you’ll receive from the Noise Office.

Why do some aircraft seem louder than others?

San Jose International Airport is utilized by General Aviation (GA) aircraft ranging from small propeller driven aircraft to top-of-the-line jet aircraft as well as commercial aircraft with a diverse range of noise levels. The noise impact from aircraft relies primarily on the type of engine used by the aircraft, the size of the aircraft and whether the aircraft is landing or taking off at SJC or a neighboring airport. Most aircraft at SJC are Stage III and Stage IV aircraft as certified by the FAA for commercial and GA aircraft.

Why do aircraft sound louder at night than they do during the day?

Aircraft utilizing San Jose International Airport can seem to be louder at night (and sometimes on the weekends) due to the lower ambient noise in a community or area. Ambient noise levels during the day tend to be higher than at night (more vehicle traffic, construction noise, etc.). Aircraft noise is thus more discernible from the quieter background noise at night.

What is a Noise Abatement Procedure?

The Noise Office uses software called ANOMS, which stands for Airport Noise and Operations Monitoring System. This system collects noise data from 10 permanent community monitoring sites in addition to flight track data from the FAA. It is the main tool used by the noise office to research complaints and to monitor noise abatement procedures and programs.

Who tells the pilots where and when to turn?

The flight paths into San Jose International Airport have not been largely impacted by changes due to OAPM initiatives or NextGen planning and implementation. Although there have been a few changes in arrival routes to San Francisco International Airport, San Carlos Airport and other airports in the region; SJC routes have not seen any drastic changes. 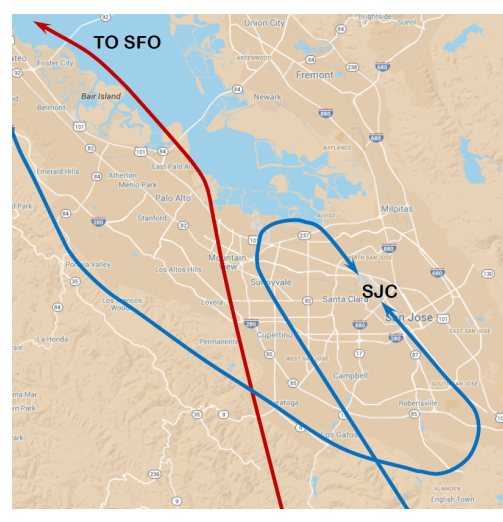 During the winter months, usually from September to March, the airport commonly experiences winds from the southeast, which means aircraft must land into the wind and from the north to the south. In order to safely navigate through the airspace for this arrival, aircraft are instructed by the FAA to follow FAA designated and published paths over communities to the west of the airport prior to turning south to arrive into SJC during inclement weather conditions (low cloud cover or fog). During these weather conditions wherein the wind is from the southeast, aircraft depart over downtown San Jose. Aircraft traffic patterns are not within the control of the Airport.

Changes to the flight paths outside of what is described above are changes made by the Federal Aviation Administration and not by the San Jose International Airport.

The map (right) shows the approximate arrival paths into SJC for both north flow and south flow. Please note, these are approximate paths to be taken by the aircraft and may be different depending on FAA instruction to aircraft based on surrounding air traffic, weather, temporary flight restrictions on the ground and traffic to other Bay Area airports.

Why do airplanes fly out of the established corridors?

There are several reasons for aircraft to fly outside of the published corridor or procedure, which can include:

How are noise levels determined?

CNEL/DNL (Day-Night Sound Level) is based on sound levels measured in relative intensity of sound, or decibels (dB), on the “A” weighted scale (dBA). This scale most closely approximated the response characteristics of the human ear sound. The higher the number on the scale, the louder is the sound. CNEL represents noise exposure events over a 24-hour period. To account for human sensitivity to noise between the hours of 10 p.m. and 7 a.m., noise events occurring during these hours receive a “penalty” when the CNEL is calculated. Each nighttime event is measured as if ten daytime events occurred.

Which Is Quieter—An Arrival or Departure?

Arriving aircraft at low altitudes are generally quieter than departures of the same aircraft type because this mode of flight requires much less engine power. However, close to the airport, the relative quietness of an arrival may be offset by the fact that they are typically lower in altitude than departures over the same location.

What are Noise Contours?

Noise contours are a series of line superimposed on a map of the airport’s environs. These lines represent various CNEL/DNL levels (typically 65, 70, and 75 dBA). CNEL noise contours are used to several reasons.

Noise contours are used to assess the relative aircraft noise exposure levels of different runway and or flight corridor alternatives.

It is the areas within the 65, 70, and 75 CNEL noise contours that the FAA considers to be the most impacted by aircraft generated noise. Beyond the 65 CNEL noise contour, noise is most noticeable in areas below established flight corridors.

I'm considering moving to a new residence in the area. How do I find out what the aircraft noise impact is there?

Prospective residents are highly encouraged to thoroughly research the noise environment of any new home. The noise environment at any location is affected by many sources of noise, including nearby roads, train tracks, industrial/commercial facilities, schools, and overflying aircraft, among others. The quarterly Noise Exposure Map can give you an idea as to whether or not your address is inside the airport's 65dB CNEL contour. Residences inside this area are those most affected by SJC airplane noise. The airport's permanently installed noise monitors depicted on the Webtrak site can also be used to see how flights are affecting the noise level at those locations. Residents in west valley communities such as Sunnyvale, Cupertino, and Mountain View are mostly impacted during South Flow operations. Those living in the Communications Hill neighborhood are also affected by SJC aircraft noise due to the elevation of that area and its location under the arrival/departure corridor.

What can I do to better insulate my residence? Are there any programs to pay for upgrades to my home?

Many manufacturers of doors and windows have created specific models to better insulate the home against noise. Adding extra insulation to walls and roofs and installing thicker windows and doors are common methods to achieve this. Keeping windows and doors closed and using a central air system are also ways to keep noise levels lower inside.

While the Airport managed an Acoustical Treatment Program to pay for upgraded windows, doors, air conditioning, etc. this program ended in 2010 and no further funds exist to assist homeowners. Eligible homes at the time and other facilities inside of the Airport's 65 dB CNEL were treated to bring noise levels inside down to acceptable levels. Unless the 65dB area increases in size beyond where it was in 2000, it is unlikely that this kind of program would be restarted.