As the weeks went by during the shelter-in-place (Chapter 5), Seymour was getting tired of staying indoors. He missed his friends just about as much as he missed traveling from SJC.

For #NationalPicnicDay, he decided to plan a small gathering to celebrate. He called Azul, Nash and Leiah at their home, affectionately nicknamed “The Hangar”, to see if they wanted to meet for lunch. The roommates thought it was a great idea – as long as they kept the gathering small – and immediately began making masks for themselves so they wouldn’t spread germs. 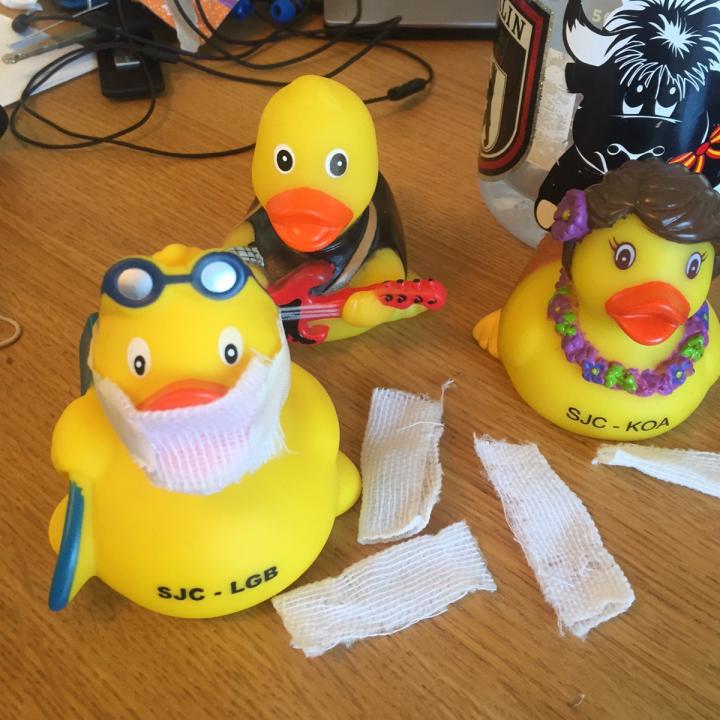 Seymour also invited his roommates, Jose and Henry to join; but Jose had other plans. He asked Seymour if they could have a snack later. Seymour, always hungry, happily agreed.

Henry was out running errands but agreed to swing by the house to give Seymour a ride to The Hangar.

On his way to pick up Seymour, Henry spotted the Hangar flock setting up in their front yard. 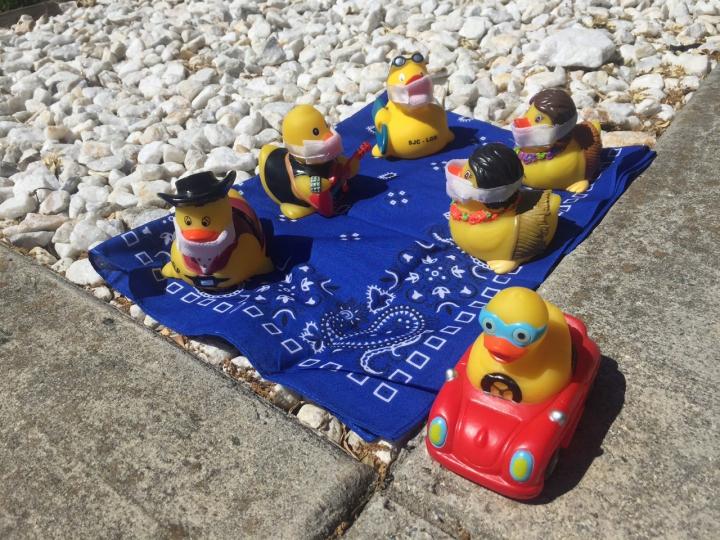 The Hangar flock spread out their picnic blanket 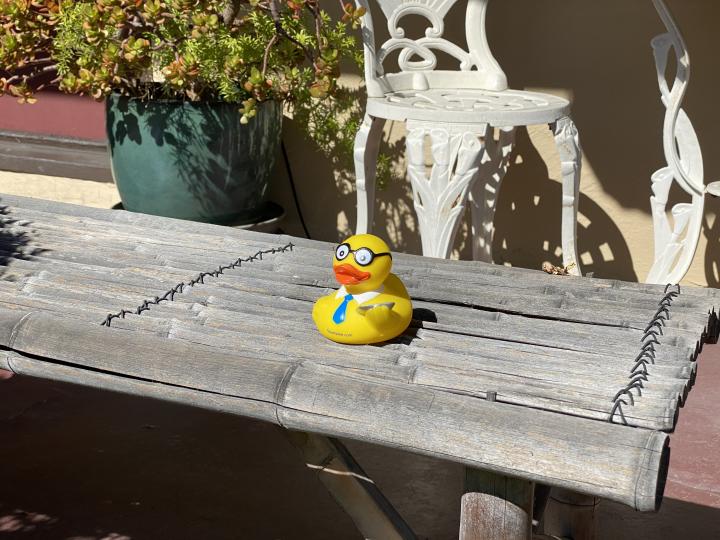 Once Henry arrived, he and Seymour struck up their usual conversation about SJC airport. Like Seymour’s best friend Socrates (Chapter 1), Henry was a true aviation geek at heart. Both ducks were sad that traffic at SJC was down by almost 96%. They missed seeing all the planes overhead.

Seymour asked Henry if he’d had a chance to watch SJC Aviation Director, John Aitken’s YouTube video, in which Mr. Aitken talked about the current state of the airport. Henry recalled the funny line, “Thank you for not traveling” and asked Seymour if he had noticed the “Go Somewhere Later” logo. Seymour laughed and said “Of course! I even downloaded the airport’s Zoom backgrounds to pretend that I’m videoconferencing from different places all over the globe!” 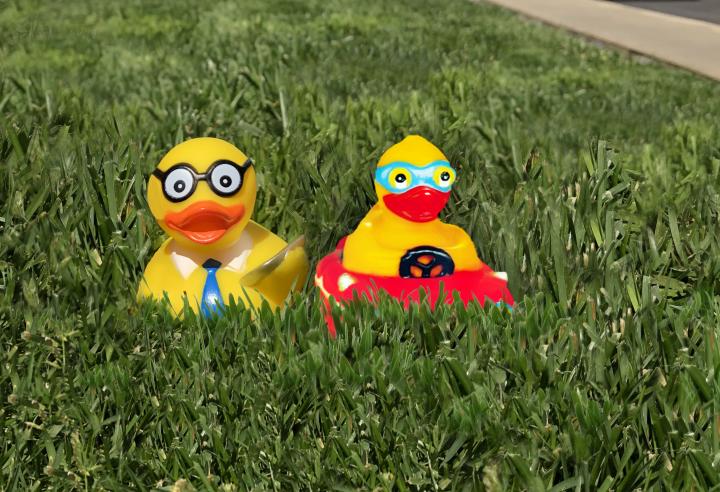 Seymour and Henry driving to meet the Hangar Flock.

Seymour once more invited Henry to join the flock for lunch; however, Henry said he had to get home – he had milk in the car that he hadn’t put in the fridge in his rush to get Seymour to The Hangar. Seymour sighed and thanked him for the ride.

Seymour then waddled over to join his friends. 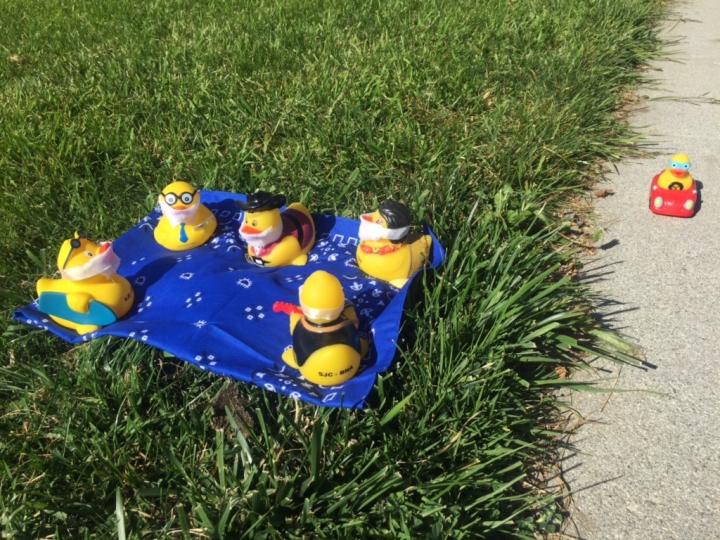 Seymour and the Hangar Flock

Together they had a wonderful afternoon.

Seymour took a rideshare car back home and promptly met Jose who had prepared a delicious feast. The two of them caught up on all The Hangar gossip and stuffed themselves full of ham sandwiches and fruit. 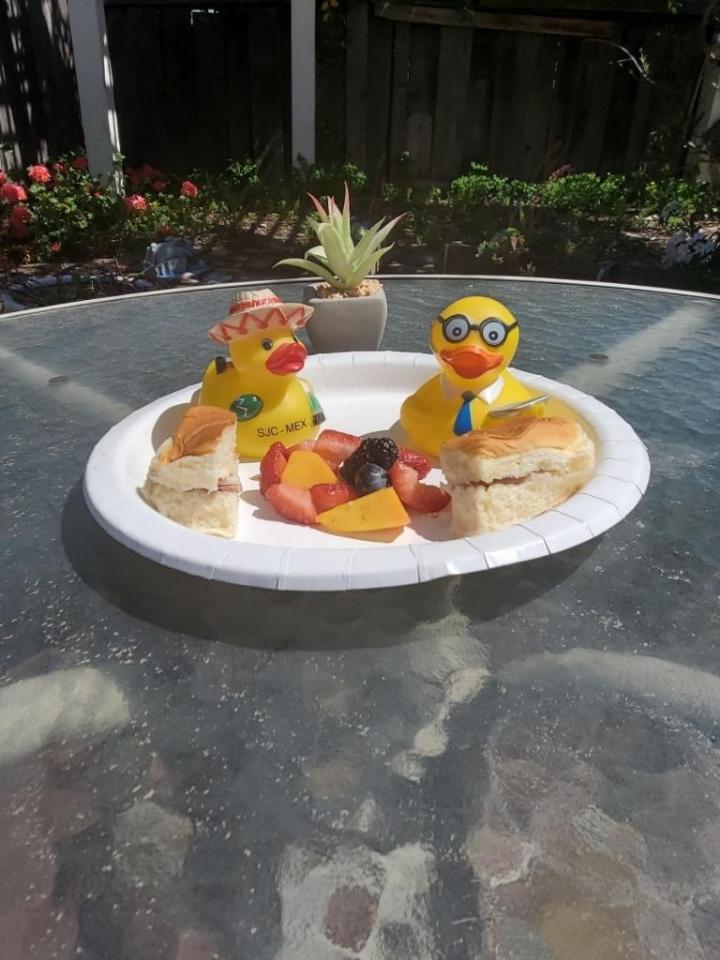