What is South Flow?

During times of inclement weather, some mornings, or during frontal passages, the wind at SJC will blow from the south. For safety reasons, aircraft must take off and land into these southerly winds, requiring the airport to operate in "south flow," an alternate arrival path into SJC that allows aircraft to land and take off into the wind 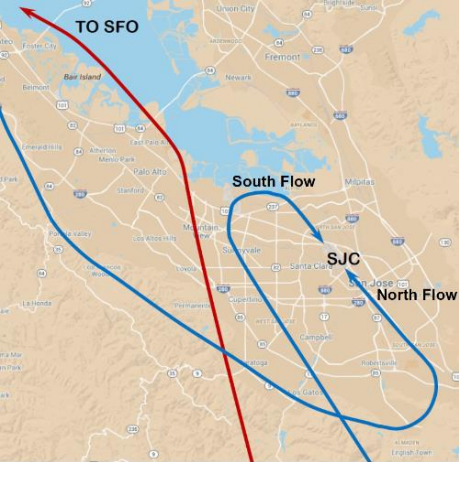 During these times, aircraft must follow a basic traffic pattern over the area to the west of SJC over Santa Clara and Sunnyvale, before turning east over Moffett Airfield to return to the airport. As these weather systems pass the airport returns to "north flow," our most common configuration, and Air Traffic Control begins directing aircraft to arrive over San Jose downtown. Please refer to the image below for reference.

The blue lines indicate the general direction of north and south flow into SJC. The red line indicates arrivals into SFO over the Santa Cruz Mountains. Aircraft must proceed along the south flow corridor - any further west would impact SFO arrivals, and any further east and the aircraft wouldn't have sufficient space to complete the turn into the airport.

Wind directions in the mornings can be determined by residents by referring to WebTrak, a tool provided by the Noise Office to allow residents to track aircraft over their neighborhoods. The weather in WebTrak is in real time, and is measured from instruments at the airport.

Why am I noticing so many aircraft in South Flow over my area? Has something changed?

In response to an increase in the number of complaints from communities west of SJC beginning in the fall of 2016, the Noise Office determined that the concentration/density of aircraft passing along an existing flight corridor over Sunnyvale, Cupertino and Mountain View into SJC had increased.

Noise Office analysis has shown that historically, aircraft arriving into SJC directed over these areas was dispersed over a wide area with few complaints from residents. While not applicable to all aircraft operating in South Flow, many now consistently pass within a narrow corridor over residential neighborhoods in Sunnyvale, Cupertino, and Mountain View, resulting in continued disturbance from those aircraft.

How has the Airport Responded?

During the November 2016 SJC Airport Commission meeting, Sunnyvale community members voiced their concerns regarding South Flow operations to the Airport Commission during a public comment session. As air traffic procedures are within the sole jurisdiction of the FAA, airport staff were directed by the Airport Commission to send a letter directly to the FAA. This would inform them of the Noise Office's findings and request that they review south flow flight procedures with the goal of reducing noise impacts on Sunnyvale residents. The letter was signed by the SJC Director of Aviation and sent to the FAA on November 30, 2016.

While the FAA responded to staff’s correspondence, the response offered no adjustments in the procedure.

In April 2017, to follow up with the meeting between local elected officials and the FAA, Congressman Ro Khanna issued a letter to the FAA Western Regional Administrator requesting the FAA work to assist develop modified procedures to limit the impact of South Flow flights over communities west of SJC.

Following a unanimous recommendation by the Airport Commission in February to form an Ad-Hoc Committee, Airport staff drafted a report on the proposed committee, and was approved by the San Jose City Council’s Transportation and Environment Committee (T&E) on September 11, 2017.

As of June 2018, the Ad-Hoc Advisory Committee has completed its work and submitted a final report to the FAA. Other documents relating to the Committee can be found on our separate webpage.

As an airport that operates in a densely urban environment, we believe it is important to minimize the Airport’s environmental impacts on surrounding communities to the extent allowed by safety and efficiency considerations. To this end, the Noise Office encourages residents to continue to submit complaints via the Airport’s noise website, or by utilizing the SJC Webtrak application. Complaints submitted through these channels become part of the official record shared with the Airport Commission and the City of San Jose City Council.

In addition to submitting complaints through the Airport's Noise Office web page, concerned community members can also connect with their neighbors through online communities such as nextdoor.com or through organized community advocacy groups, such as http://savemysunnysky.org.

The City of Sunnyvale has deployed its own system of four noise monitors and provides an additional flight tracking system.

What can I do now?

As the Airport/City of San Jose has no control over flight paths or procedures, affected residents have the following options to communicate with the FAA and other official public bodies to participate in the community involvement process through which changes can be suggested: